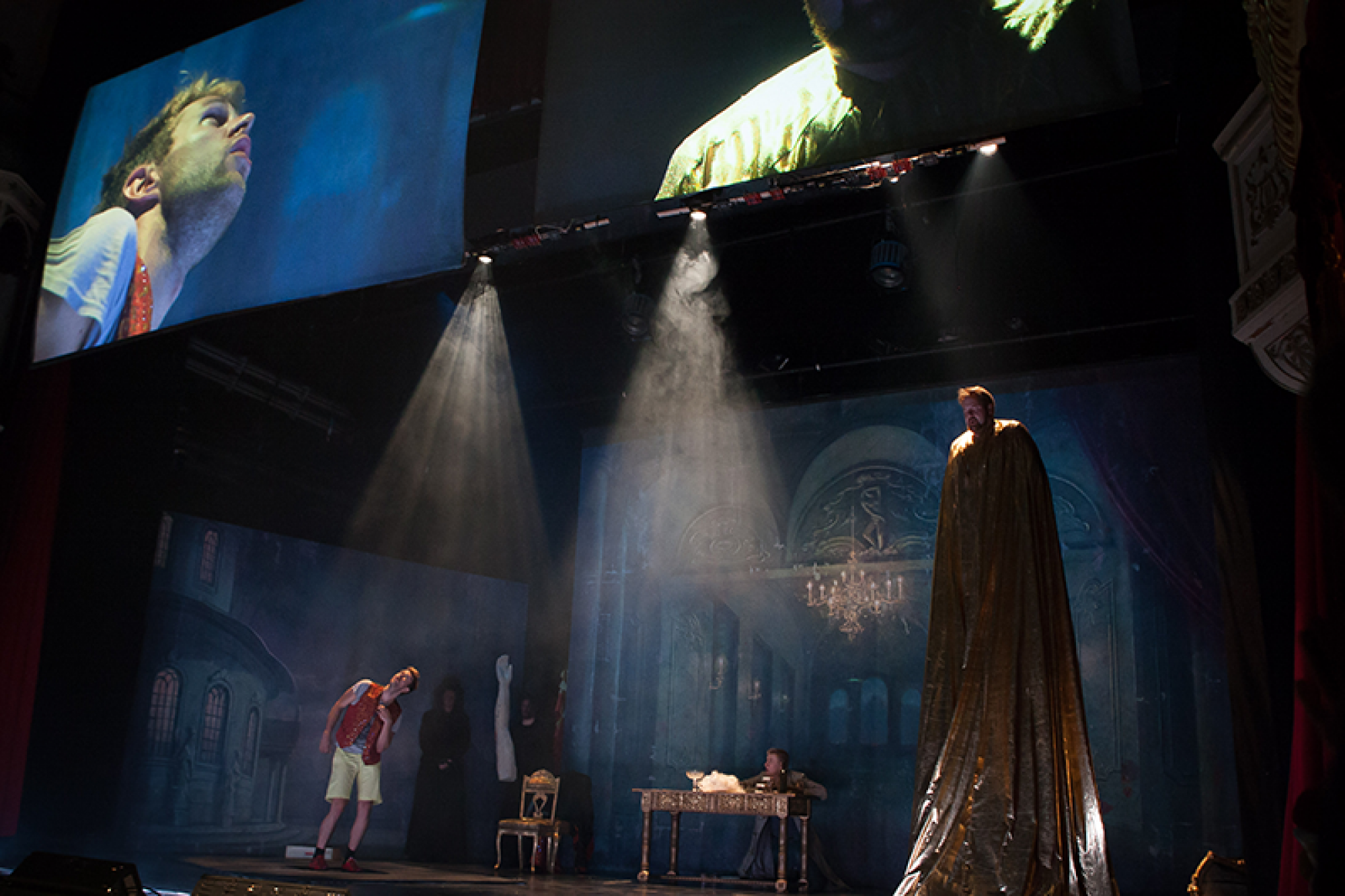 “It’s not as if it was some sudden epiphany. In the many opera performances I have conducted and seen over the years, I have always felt that there was something missing,” says conductor and all-round musician Ville Matvejeff, recalling the genesis of the New Generation Opera. “Then it came to me. Screens have been used in opera productions for quite some time, but never in this way.”

When image projection is used in opera productions, it is generally incorporated into the set design and features either abstract shapes or concrete images as backdrops. Also in Finland, there have been some ventures into apparent or actual real-time video: in a production of Richard Wagner’s Lohengrin at the Savonlinna Opera Festival in 2011, the main character had a video camera in hand on stage, but the image projected on the screen was actually pre-recorded; in the premiere production of Mikko Heiniö’s Eerik XIV in Turku in 2011, however, cameramen actually followed the singers around the stage and the action was projected onto screens in real time.

This year at the Helsinki Festival, the production of W. A. Mozart’s Don Giovanni by the New Generation Opera goes a step further. As Don Giovanni and Zerlina sing Là ci darem la mano to one another, both hold a camera phone in one hand, providing close-ups of their amorous encounter. There are six camera phones on stage in all, and viewers are able to choose between two screens and the live situation on stage in deciding which viewpoint or character to follow. This is like reality TV on the opera stage.

The visual culture of today

Matvejeff is almost beside himself with excitement. He believes that opera can be interesting for young people if it is set in a world that is familiar to them and boldly engages with the visual culture of today. He acknowledges that there is a lot of prejudice against classical music, and opera in particular, but he considers that audiences will be swept along as long as they can be brought over that initial threshold.

“These days, you have to look good all the time, because you never know when you will end up in a photo that will be posted online. Everyone carries a camera phone. People today are subjected to several simultaneous impulses, as in watching three screens at once. But this also brings freedom of choice. In this production, opera singers come much closer to the audience, and we will be able to see their faces and their expressions without having to resort to binoculars.”

Naturally, this approach brings special challenges of its own, which conventional opera productions do not take into account – or do not bother to take into account, as Matvejeff considers. Here, the opera singers must engage in acting on a scale of detail usually required only of film actors, balancing the relationship between voice and gesture. They must also be able to operate a camera phone while singing, high Cs notwithstanding. For Matvejeff, this is not a problem but an opportunity.

“This is HD applied to acting, which is what making music has always been about. We have been busy learning how to use a camera phone while singing throughout this spring, and director Erik Söderblom has achieved quite extraordinary results with the singers. This raises the performance to a wholly new level, as the visual dimension is no longer subordinate to the music. Even opera DVDs and the live performances from the Metropolitan Opera in New York that we enjoy nowadays are created for the stage and not directly for the screen.”

Support from the old guard

Numerous more experienced opera professionals have also been more than willing to support and assist the production team, whose average age is thirty or so.

“We planned for about a year, but the project only properly got under way when we were given a grant by the Jane and Aatos Erkko Foundation. We also consulted more experienced professionals, and everyone we talked to considered this an excellent idea.”

Matvejeff drops a whole bevy of names that amounts to a who’s who of Finnish opera: Karita Mattila, Matti Salminen, E-P Salonen, Leif Segerstam, Jorma Silvasti, and so on.

In fact, so far no one has taken a dim view of the New Generation Opera. In addition to the EUR 600,000 provided by the Erkko Foundation, contributors include the Tapiola Sinfonietta, Nokia (which is supplying the camera phones) and the Arcada University of Applied Sciences (which is supplying technical support for the video production and equipment for wireless image transmission).

So is this an open acknowledgement that classical music cannot reach new audiences unless visual stimulation and sensory overload are involved? Are opera performances and concerts not for concentration and meditation, as is often pointed out? Is the music not enough in itself?

“That’s a tricky question, but I don’t believe in the authoritarian top-down approach, where someone dictates exactly how people are supposed to experience a performance. I am not against the quiet meditation aspect, but I think that this is precisely what people find so intimidating. Do I dare go in there? How will I know what I am supposed to do? A newcomer to the opera is much like an occasional churchgoer who has no idea when to stand up and what to sing. An opera performance must have familiar elements that people can recognise and identify with. Camera phones are one such thing,” says Matvejeff.

Matvejeff is already thinking beyond the opera debut of camera phones. New opera concepts will be sought through a project called Call for Concepts over the next two years. The best ideas submitted will be implemented, and the winning concept will be explored in a full-scale opera production. Matvejeff notes that in the future the audience could participate in an opera production by voting with their phones, much like in Big Brother, the daddy of all reality TV shows.

“The audience could vote on what happens next, in real time, and the production team would have rehearsed all the possible options so well that they could switch from one to another instantaneously. People would come to see several performances so that they could experience different narratives each time.”

Come to think of it, even this idea does not seem so far from reality.