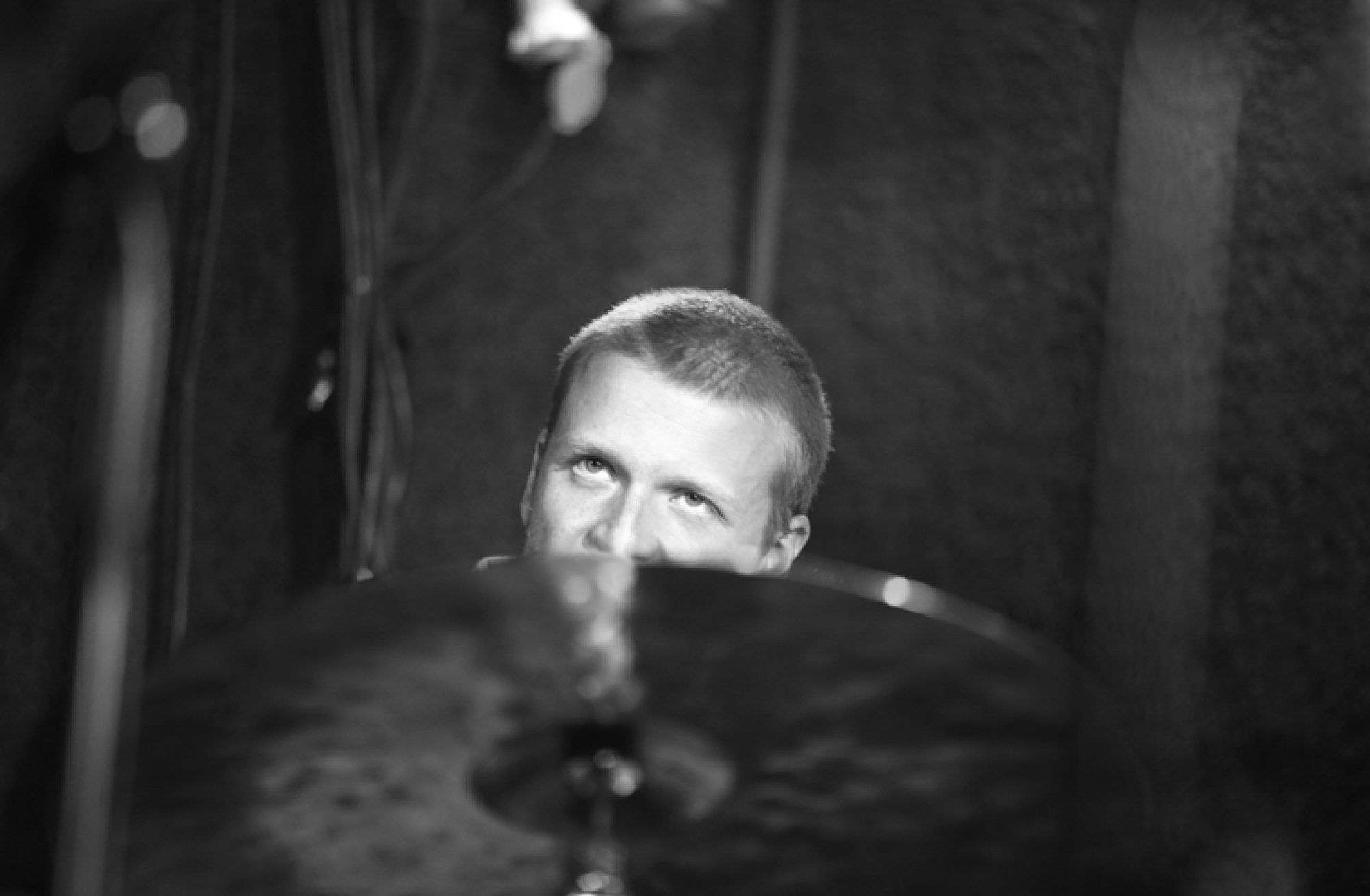 Finnish jazz generally enjoys neither major commercial success nor public funding. Many jazz musicians are jacks of all trades by force of necessity: to be a jazz performer is also to be a jazz-everything-else.

How do you end up with a million dollars by playing jazz? You start with two million dollars. It is an old joke but a good one in that it is still wryly accurate in describing the financial realities of jazz musicians today.

Not that anyone ever began playing jazz with the specific goal of becoming rich. In a genre where the music is mostly very advanced and driven by artistic values yet distributed and sold according to the commercial values of pop music, the equation of making money is very difficult indeed.

In fact, Finnish jazz musicians – most of them these days with quite as much formal education under their belts as classical musicians – are expected to compete with the commercially optimised mass-produced catalogues of major popular music labels. The numbers bear out this claim: looking at public funding for various genres of music, we find that more than 90% of the pie goes to classical music.

“Government support for jazz is peanuts compared with classical music. Since jazz is a marginal genre, public funding is understandably low. But even an increase allowing something approaching normal wages would be a dream come true,” says pianist Jussi Fredriksson.

Most jazz musicians prefer to work hard: they would rather have more and better opportunities to work than live on handouts. The main problem, according to drummer Jussi Lehtonen, is that there are too few opportunities for performing and recording. But even he thinks that the operating environment could be improved with more central and local government subsidies and private sponsorship.

“The public image of jazz competence in Finland is too narrow. There should be more jazz expertise available at the decision-making levels so that the visionary capacity of African-American rhythm music could better be conveyed,” says Lehtonen.

Bass player Wade Mikkola has both an American and a Finnish perspective. “Unfortunately, the situation in Finland is increasingly coming to resemble that in the USA. Commercialism has led to the dominance of fashion trends, and this impacts the entire field. It is a natural consequence of jazz being bundled in the same category as pop music. The official division of music into ‘light’ and ‘serious’ music is a colossal disadvantage for what we do. To regard jazz as ‘light’ music, as having the same artistic and aesthetic precepts as mainstream pop, demonstrates a woeful ignorance of what this art form is actually about,” says Mikkola.

Many trickles make a river

Jazz musicians cannot make a living just by playing, composing and arranging music. They augment their income from various sources such as recordings, teaching, record sales, grants, studio sessions and royalties. Whether a musician is formally an entrepreneur or a freelancer makes little difference: everyday life is in any case filled with mundane tasks that have no impact on what happens on stage or on disc.

Jussi Fredriksson spends hours on the phone or doing e-mail every day. “In an ideal situation, I would not be the one doing this. Managing a record label and a jazz association, selling recordings and doing marketing and publicity are very time-consuming things. Outsourcing is either not possible or too expensive.”

Teaching can in fact pay better than performing. For the three musicians interviewed here, teaching is not only an important income source but also a steady one.

Jazz musicians get by financially by doing a lot of different things, but few can be said to live comfortably. “There is a handful of people who play on a lot of recordings who do well in this business, but the majority of jazz musicians in Finland tend to live at subsistence level,” says Fredriksson, who feels that while a little uncertainty in life gives a particular edge, constant financial difficulties sap one’s creative energy.

Wade Mikkola notes that because he is willing to work hard, he gets by, even though the pay is bad and he has received scarcely any grants.

Selling records is hard to do

Self-published musicians have to address details that have little to do with the music itself yet are important, such as record sleeve designs.

Jussi Fredriksson points out that releasing discs is extremely important for promoting performers. “If you are selling a band, you are selling an entire package of which a CD is an integral part. These days, you also have to have good marketing material, with photos and information and all the rest of it. Jazz music is difficult to sell, so it is doubly important to package your product really well.”

Fredriksson knows what he is talking about, having released two discs on his own label. “I decided to go this way once I realised that I could do the best job of it myself. A record label naturally thinks principally of its finances, while self-publishing is for me a part of the artistic process. An idealistic record label has a strong vision as to the sort of music it wants to release and the capacity for merging with the creative process; if you start with bean-counting, then the project as a whole is doomed to failure.”

Fredriksson is very pleased with his releases. He has a satisfactory partnership with his distributor, Sony Music, and his discs are selling even in Japan, and in Sweden through Plugged Records. But, as Jussi Lehtonen points out, record sales are rarely a major source of income for jazz musicians. “A CD is more like a calling card. But for bands who have a lot of live gigs, record sales at the venue can in fact bring in quite a lot of money.”

Wade Mikkola agrees. “I have come to the conclusion that in terms of sales revenue it is hardly worth the trouble to print physical copies of an album, unless you have performances where you can sell them. Digital sales over the Internet have conspicuously cut into sales of conventional discs.”

Everyone needs a stage

Most Finnish jazz musicians play with several bands actively and all the time. Jussi Fredriksson, Jussi Lehtonen and Wade Mikkola each play in 6 to 11 groups, and all three are leaders of more than one of them. There are thus probably more jazz bands than there are jazz musicians in Finland, even if the number of trained professionals has increased exponentially in the past few decades.

Jazz is traditionally an orally learned discipline, and its most natural habitat is the concert venue – whether a local bar or a concert hall. In Finland there is no dedicated club with jazz every evening, not even in Helsinki, although there are bars that feature jazz on one or two nights a week.

Even before the Musiikkitalo was inaugurated in autumn 2011, jazz was on the programme of at least five Finnish concert halls with some frequency. There is no shortage of physical performance spaces. The Musiikkitalo has so far not really profiled itself as a venue for Finnish jazz, especially considering what is being achieved in more modest settings all the time.

The best example of the latter is Koko Jazz Club, launched by bass player Timo Hirvonen and Jussi Lehtonen in autumn 2010. Often filled to capacity, the venue features live jazz twice a week. Performers have included names such as Joey Calderazzo and Jerry Bergonzi in addition to the Finnish jazz elite.

“It has not been a huge financial success; it is more of an exercise in community and solidarity. We have seen how important it is for performers and audiences to experience an intimate and interactive performing situation.” Lehtonen hopes that the positive atmosphere can be perceived from the outside too, so that the club could attract more sponsors and partners.

Jussi Fredriksson, producer of two dozen Flame Jazz concerts in his native city of Turku, the European Capital of Culture 2011, is certain that the field of jazz will change. “The Finnish Jazz Federation is revitalising itself and will assume a more active role in improving the status of musicians in Finland and abroad.” Fredriksson is a member of the Board of the Federation and knows that there are many fantastic activists and above all brilliant performers out there.

Wade Mikkola considers that the field is divided at the moment and believes that it will be difficult to make progress until everyone is in the same boat rowing in the same direction. “No art form can be taken seriously if one of its branches is considered less artistic than another. If we could reach a consensus, it might finally be possible to set up a jazz club in Helsinki where jazz could be played of whatever style and flavour the performers choose to pursue.”

Mikkola notes that major investments have recently been made in exporting Finnish jazz, even though improving conditions on the home front should take precedence.

Few Finnish jazz performers are musicians only. Considering all the other things they get up to, we should perhaps describe them as jazz activists or jazz operators. But even as a jazz operator you cannot end up with a million dollars unless you begin with two million.

Jazz has been described as the classical music of America. In Finland – where the big genres in popular music are the tango and, more recently, heavy metal – jazz has never been popular but is nevertheless traditionally regarded as popular music and has had to be lumped into this category in order to be heard at all.

Jan-Erik Holmberg, a long-standing contributor for the Finnish Broadcasting Company YLE and the national daily Hufvudstadsbladet, is a freelance journalist specialising in jazz.