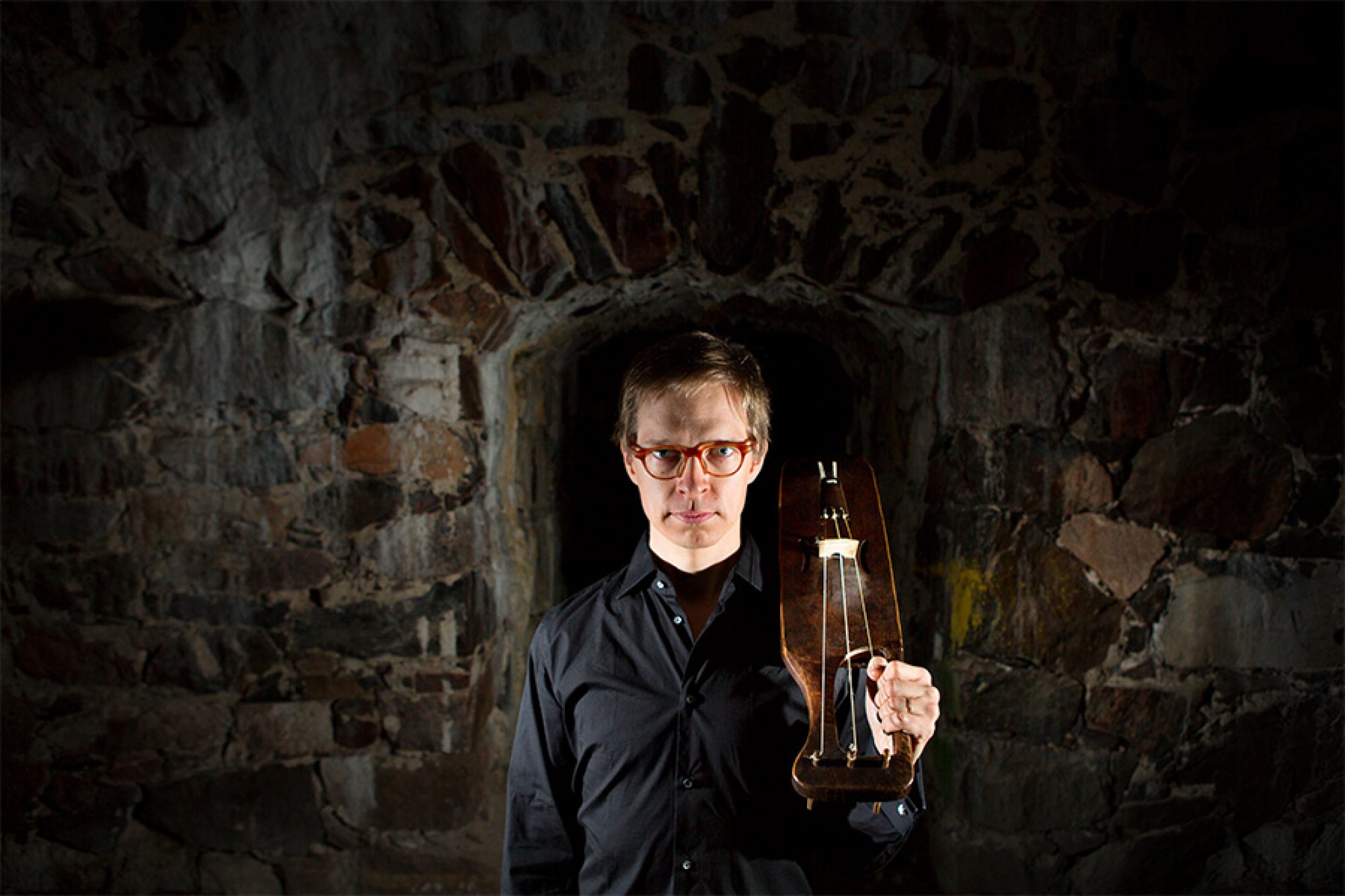 “What a weird instrument!” was Ilkka Heinonen’s reaction when he first encountered the jouhikko in the early 2000s. Having played all kinds of music from folk to rock, he had decided to focus on classical double bass and to qualify as an orchestral musician. But that is not what happened.

New folk music became Ilkka Heinonen’s home ground. He has played bass with bands such as Ruuti, Teija Niku & Grupa Balkan, Kirjava lintu and Freilach mit Kneidlach for quite some time. Having discovered the jouhikko in the early 2000s, he kept it to himself at first.

“I would improvise on the jouhikko at home in the evening. It was introvert music-making, just for myself.”

Since then, Heinonen has performed on the jouhikko as a soloist, in many duos and in the Jouhiorkesteri ensemble that has acquired some international fame. He has used the jouhikko to play Medieval and Renaissance music and also contemporary music, for instance the Jouhikko Concerto of Timothy Page and several works by P.H. Nordgren where the jouhikko is included in the scoring.

In the Ilkka Heinonen Trio, founded in 2012, Heinonen is finally able to give expression to his own voice. Nathan Riki Thomson from Australia plays bass, and musical polymath Mikko Hassinen plays the drums and is also responsible for sound design. The Trio intend to record their first album this autumn, and in October the Ilkka Heinonen Trio will be seen as a showcase performer at Womex.

“The Trio is for me in a class of its own as far as playing the jouhikko goes. In all other contexts I think through the context – engaging in dialogue between folk music and early music, for instance – but in the Trio I can just let myself go.”

In conversation, Heinonen drops names at a dizzying pace: Jordi Savall and Tomasz Stanko, Carl Philipp Emanuel Bach and Arnold Schönberg. He is very much into free jazz, which is what inspired his idea for the Trio in the first place.

“I have not been able to give voice to my entire musical history in any one place so far. In the Trio, I can bind all the strands together using the jouhikko. The only frame of reference is that I have confidence in what I do.”

The jouhikko: an ancient journey continues

Most Finns are familiar with the kantele, Finland’s national instrument. The jouhikko, by comparison, is unknown to many, even if its rough and somewhat mystical sound has even attracted international attention.

There is something mysterious in the sound of the jouhikko, an echo from an archaic world. The instrument is a bowed lyre held between the knees and has a long history. It is similar to the hiiukannel in Estonia and the crwth in Wales.

There is one person above all others who must be named when discussing the jouhikko: instrument builder and musician Rauno Nieminen, who has tirelessly promoted the instrument for decades and even completed a doctorate on it. He built his first jouhikko in 1978 and has built several hundreds to date.

According to Rauno Nieminen, both the kantele and the jouhikko evolved from the lyre, which arrived in Finland in the 11th century. As bowing was introduced, the evolution diverged. Bowing allowed using the other hand to shorten the strings to produce more notes, so fewer strings were needed. Modern jouhikkos have two to four strings, with a range of an octave and a half. The instrument itself places certain limitations on the performer, but beyond that there are no limits, according to today’s jouhikko performers!

Many jouhikko players emphasise the importance of playing solo, even claiming it to have a therapeutic effect. “It’s a sound that invites you to play and improvise. The sound seems self-sufficient,” says Ilkka Heinonen, one of the leading proponents of the instrument. “The instrument determines its own boundaries, within which you can do anything at all. Playing solo is the only historical performing style we know of, but surely people must have played these things together too!”

The jouhikko was still in use in Karelia and Savo in the early 20th century for accompanying singing and playing at dances. A.O. Väisänen, a celebrated folk music scholar, recorded performances by some of the last surviving practitioners, and Otto Andersson wrote his doctoral dissertation on the jouhikko on 1923. The tradition of playing almost died out in Finland until the revival movement of the 1970s. Swedish musician Styrbjörn Bergelt was the leading figure in this movement; Finnish musicians who played the jouhikko at the time included Jouni Arjava, Martti Pokela, Juha Kangas and Hannu Syrjälahti.

One of the milestones in the new rise of the jouhikko was the album Hiien hivuksista (From the ogre’s hair, 2003). The musicians appearing on the album eventually came together as the four-member Jouhiorkesteri, which released its début disc in 2008. In the same year, they were invited to Womex as a showcase band, and they have subsequently appeared in Malaysia, Taiwan and Japan.

Fortunate jouhikko players get to work with a builder. Ilkka Heinonen ordered his first jouhikko from Rauno Nieminen in 2003 and has worked closely with him ever since. Heinonen has several instruments, of which two are normal-sized jouhikkos built by Nieminen. He uses one for a large acoustic sound and the other when there is amplification.

“I use fishing line strings in the jouhikko for amplification, because they stay better in tune at clubs and humid venues. The sound is not as big, but it is very similar in type to that achieved with horsehair strings. The other jouhikko has a larger sound; I use the thinner gut strings, and the bridge is higher. I have trimmed it to have a large sound and clarity with projection. It looks a bit like a treble viol.”

Although the jouhikko still has not made a massive breakthrough in Finnish music, it has clearly established itself in the margins. There are performers who differ greatly from one another in style, and many of them also teach. Pekko Käppi has been taking the instrument into rock and alternative music, performing Finnish punk classics, and so on. Lassi Logrén and Värttinä have even taken the jouhikko abroad; Värttinä used it in the Lord of the Rings musical. For this purpose, Rauno Nieminen developed an alto jouhikko with a range a fifth lower than that of the normal one. Jouhiorkesteri included in its lineup a tenor jouhikko, an octave lower than the normal one. It was originally known as the bass jouhikko, but the name was changed to better reflect its actual range.

Ilkka Heinonen has a very definite personal agenda as far as the jouhikko goes: “The jouhikko should not be defined as just a folk instrument! Why not just talk about music as music? I would like to see the jouhikko used as a string instrument among many, without sacrificing any of its characteristics or traditions.”

There is plenty of material on YouTube about the jouhikko and its sister instruments; search for “Talharpa 2009”.